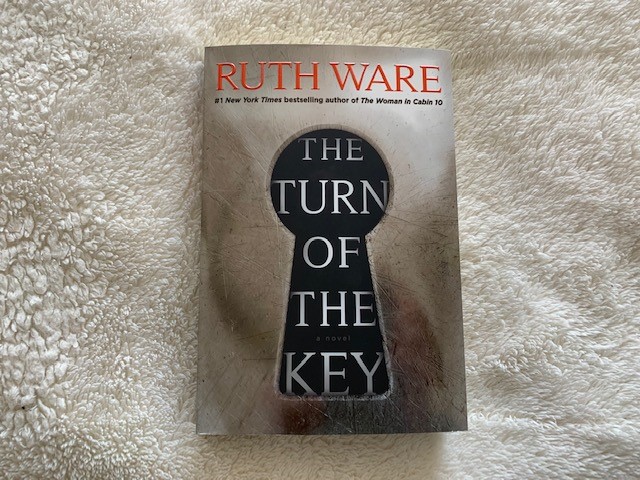 It’s been years since I have read Henry James’ Turn of the Screw, the ghost story written in 1898 about a governess working at a remote country home taking care of some very creepy children. Ruth Ware gives the proper respect to the inspiration for her 2019 novel, The Turn of the Key, but adds a modern-day twist in this story about Rowan Caine, a young woman who accepts a post in the remote Scottish Highlands looking after…you guessed it….some very creepy children.

Instead of children speaking to the ghosts of former servants, this modern day tale introduces us to Heatherbrae House and the resident “smart” assistant, Happy. There are no visible locks on the doors, there are no visible light switches in the rooms and controlling the shower requires a multi-page operating manual. Instead of phoning the house or calling Rowan on her mobile, the owners (who had to leave suddenly on a business trip), check in using speakers that are built in to the house. They can also control the lights remotely and access cameras positioned around the house. Nothing creepy or ominous about that…

To add to the unease, Rowan learns that the four nanny’s who worked at the house prior to her arrival all left under mysterious circumstances. Some after spending only a single night in the house. On her first night, Rowan finds an unfinished note in her bedside table written by her predecessor seemingly warning her to be careful.

Underlying all this, is the readers knowledge that Rowan is telling the story through a series of letters from prison where she sits awaiting her trial for the murder of a child under her care. Knowing this fact from the beginning of the story adds to the suspense as the details unfold page after page. Even though I knew from the start of the book that Rowan had accepted the position at Heatherbrae House, during her interview process I was still urging her to reject the job and flee back to London.

Once Rowan gets to the house, she is left alone with three young children, two dogs and a somewhat mysterious handyman named Jack. And of course, don’t forget Happy. As seemingly unexplained things start to happen and with the children in her care whispering about ghosts, Rowan starts to research the history of the house and learns of mysterious deaths and mad scientists with a fascination with poison. The weird things start to build up – night after night of sinister footsteps, music blasting from the houses speakers and doors locking by themselves. As Rowan tries to figure out reasonable explanations for all of these odd occurrences, she is also grappling with the children who are not as easy to manage as they originally seemed, all the while feeling that everything she does is being watched via the smart house cameras.

One of my favourite things in books is when the setting becomes an actual character in the story and in The Turn of the Key, Ruth Ware delivers on this so well. While the mystery is solved, the ending does not answer all of the questions raised in the book which just adds to the atmosphere of the story. If you love a fast-paced mystery with a truly creepy vibe, I think you will enjoy this one as much as I did.

Books,dogs and cats
The Truth for Kyle Brennan

Scientology & the Death of Kyle Brennan