On Thursday night, David and I went to the hockey game – the Leafs vs. Columbus Blue Jackets. We went into the city a bit early so we could meet friends for a pre-game dinner as they also had tickets to the same game. We both live outside of Toronto now so it didn’t make sense to miss an opportunity for a quick catch up when we were all going to be in the city at the same time.

First of all, our friend C has this amazing autographed, authentic Daryl Sittler jersey. Apparently her brother still disputes ownership but as far as I’m concerned, if she says it’s hers, it’s hers. For those of you who are not hockey fans, or not Toronto Maple Leaf fans (/gasp), Daryl Sittler is one of the all-time great hockey players. He played 15 years in the NHL and on February 7, 1976, Sittler set an NHL record that still stands, for most points scored in one game when he recorded ten points (six goals, four assists) against the Boston Bruins. He was captain of the Maple Leafs and still works for the organization. 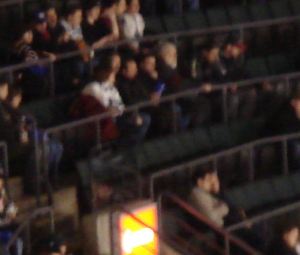 So after having a great dinner, we walked over to the arena – staying underground the whole way cause it was freezing! We were not sitting together so once we got to the arena (it was apparently “Rogers Cone Night”, who knew), we said our goodbyes. David and I did manage to see C&M getting settled into their seats though.
And I know, the picture isn’t particularly clear. I took it with our little point & shoot camera which is a great camera, but doesn’t have the long distance capability required to get this shot. But it is them! C is just taking off her jacket to show off that lovely jersey!
The picture I wished I could’ve taken was when C appeared on the big scoreboard jumbotron, rocking out to AC/DC and cheering on the Leafs in overtime. I was unfortunately not able to get my camera out quickly enough but we cheered her. I’m just uncool enough that I poked my neighbour and said “I know her – she’s my friend”!

3 thoughts on “More fun from a hockey game”

Books,dogs and cats
The Truth for Kyle Brennan

The Church of Scientology & the Death of Kyle Brennan

Injustices we may not be aware of